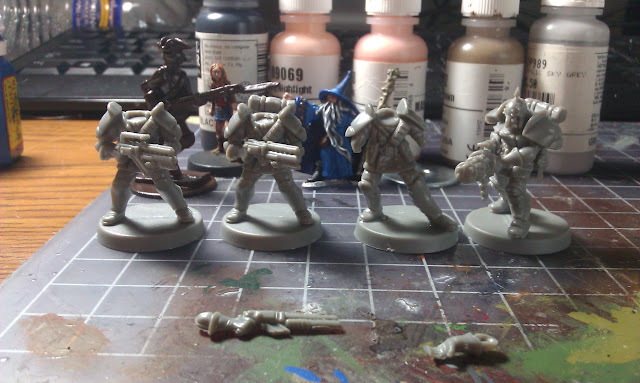 This November at the HMGS Fall-in convention, against my better judgement, I will be running three games. The first of which, is the Victorian Science Fiction mini-epic entitled The Flight of the Albatross where the crew from the Empress of Austria’s downed cloud-ship must fight off the indigenous inhabitants of Venus while they await rescue by the forces of several competing European powers.

I make it no secret that I am a huge fan of the G.A.S.L.I.G.H.T. rules system and actually being friends with the authors hasn’t helped matters! I’m originally from a Battletech and Games Workshop background, so I love the simplicity of the game mechanics and the fact that the story and creativity takes precedence over rolling buckets of dice and worrying about which blasted codex has just come out and added “rending” to all of the troops.

Anyway, I’ve created several armies for the game in the two year period that I’ve actively played the rules: A Napoleonic Russian force, and two opposing American Revolution armies for my ongoing Corpse & Musket themed zombie games. These will be my first actual VSF armies.

Now I already have a few small units on the table, including a standard 10 man squad of Austrian Sailors (Old Glory Boxer Rebellion Range) and numerous 19th century personalities I had painted up for my Victoria Hawkes and the Steel Menace Doctor Who game from Fall-In 2011, but I need to fill out the ranks of my German and British forces a bit before begging/borrowing from the rest of the group. That’s where these guys will come in.

These figures started out as part of an 80 figure bagged set from the Warzone game that I purchased off the Prince August website about a decade ago (oddly enough, reviewed recently on the Graven Games site) and I never really got around to doing everything constructive with them. The Imperial Soldiers are far too firmly planted in the Sci-fi British WWI look to be of use, but the Bauhaus Ducal Militia (with some slight tweaking) are perfect for the wacky steam-derived units that populate the G.A.S.L.I.G.H.T. convention game landscape.

Overall, for being late 90’s vintage, the sculpts on the minis are bad at all, with the only possible exception being the heads. I solved this by purchasing some of West Wind Productions Pickelhaube gas-mask heads and re-breather backpacks from  Noble Knight games to bring them further in line with the VSF look I’m going for.

The rifles were a bit too futuristic as well, so like the example lying on the cutting mat in the header graphic, I clipped off the upper hand grip, shortened the magazine and trimmed off the strange cylinder bit at the bottom of the barrel. My thinking on this is that with painting the remaining weapon furniture in a wood tone and perhaps running some tubing from the gun to the backpack, they might serve as a respectable “steam-rifle”. 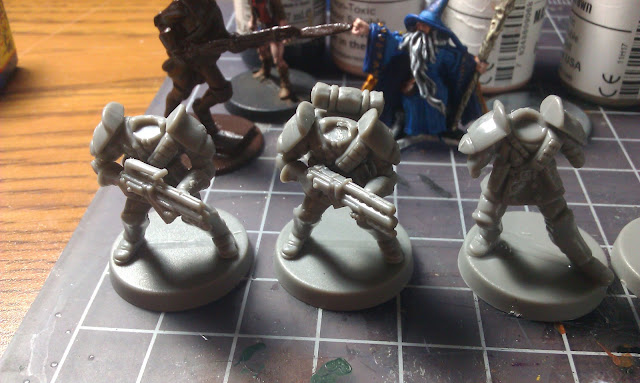 A close up of the “steam-rifles” pre and post-op

Another cool feature of these figures is that you get an officer/sergeant as well as a very cool Gatling gun-toting heavy weapons guy (perhaps my favorite of all), who will fit in especially well: 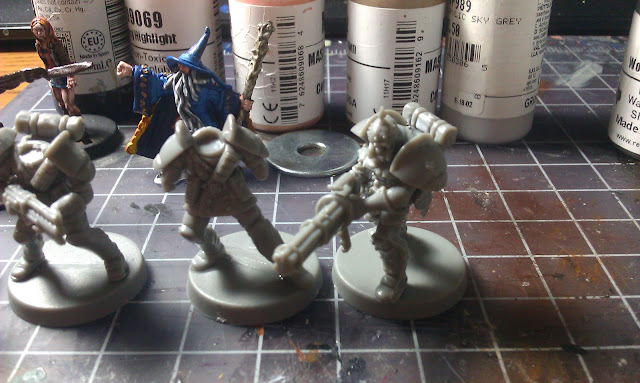 Close up of the Gatling trooper. Sorry for the blurry camera phone pic 😦