My gasmask pickelhaube heads order arrived early this morning and I was able to make a little more progress on my VSF German steam-rifle troops. The West Wind metal heads were slightly smaller than I had expected, but I think they don’t look too freakishly out of proportion to the Warzone bodies once they were painted up. I was actually pleased with how “Prussian” the formerly sci-fi uniforms looked by merely changing the color scheme and snipping off a few anachronistic bits.

The one problem I encountered were the greeves and over-sized pauldrons. Originally I painted them light grey and added some German markings, but when finished, they looked a little too modern, so I painted them more of a boiler-plate color similar to the armor displayed on the new Dystopian Legions Prussian boxed set.

A few more pictures are below, including the start of the Gatling-gun trooper: 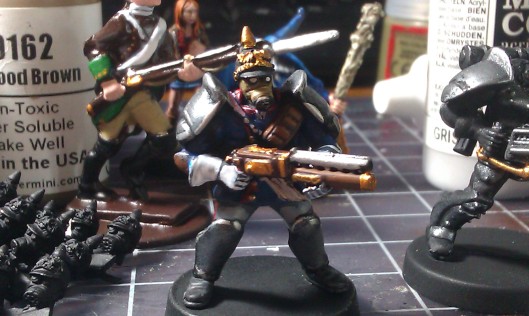