As usual, the HAWKs hosted a room full of games at the annual HMGS Fall-In convention. In addition to assisting with Noah Guilbalt’s award-winning “Dungeon Crawl”, I ran three games of my own.

First up, on Friday night, I ran my first “true” Victorian Science Fiction game using the G.A.S.L.I.G.H.T. rules. The story was a parallel plot to one of Chris Palmer’s previous Venusian scenarios and involved the crew of a downed cloudship fighting off the combined forces of the lizard and parrot men while awaiting relief from four separate (and competing to some degree) European forces.

Next, on Saturday morning, there was my “Corpse & Musket” installment: “Paul Revere: Werewolf Hunter” loosely based on the graphic novel by Ed LaVallee and Grant Bond. Once again the G.A.S.L.I.G.H.T. rules were used, with some home-grown gothic horror elements. 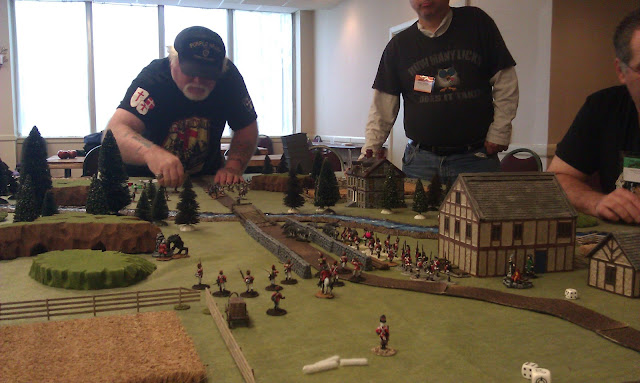 The British close in on the bridge

This scenario had Paul Revere and a group of riflemen hunting down two werewolves and a pack of giant wolves while the colonial militia and British fought over possession of the bridge and cache of weapons. There was also a family in distress to be rescued/captured/eaten in the center of the board. Unlike the two other times I ran this game, everything came out rather balanced. The werewolves lasted until the end of the game, but didn’t run away with it (actually they lost) and the British fared better than they usually do and actually seized most of the supplies. The colonists, sat most of it out and easily occupied the bridge, keeping most of the British at bay with the riflemen under Revere’s command. Other than one militia unit taking a beating from the giant wolf pack, they came out with few casualties.

For some odd reason, and it must be an American thing, the werewolf player always runs straight for the British lines at the start of the game… 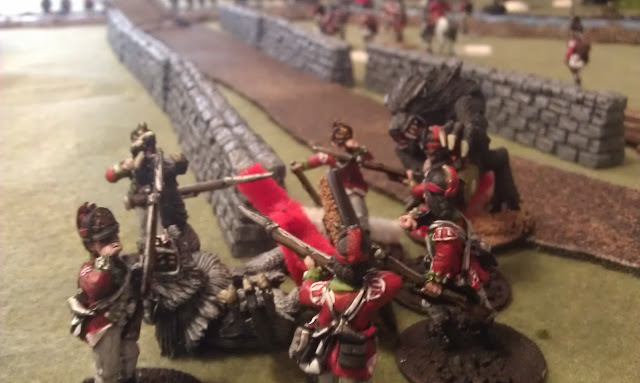 The British light infantry holds off both of the werewolves.

The grey wolf, who was dubbed “Snuggles with Danger” (its his American Indian name) by the kids in the game rolled a 20 during a melee late in the game and was quickly dispatched by the unusually lethal light troops. The black wolf was another matter: it took 4 rounds of mutual misses before he and the light troops officer mutually killed each other. 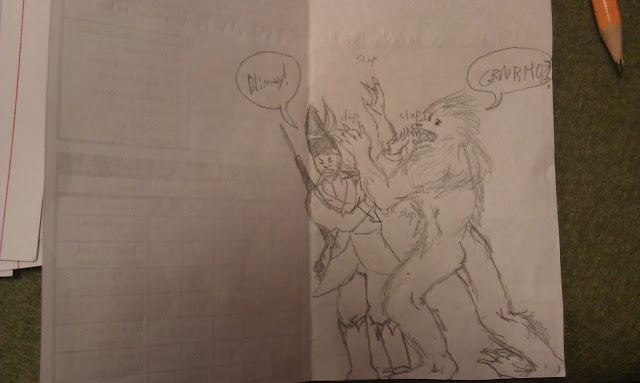 By game’s end, in a “cinematic overtime round” demanded by the players, Paul Revere squared off with the British commander, General Bloodsworth (blame LaVallee & Bond for that one, not me) though hard fought, Revere emerged victorious.

That night, Noah and I teamed up again to run our Doctor Who epic “The Crash of the Byzantium” re-utilizing many of the scenic elements from the dungeon game and the VSF game. The plot followed the 5th season (new series) Doctor Who episode pretty closely and saw The Doctor, Amy Pond, River Song and a cohort of militant Anglican clerics struggling to survive in the maze of the dead while being stalked by an army of The Weeping Angels. 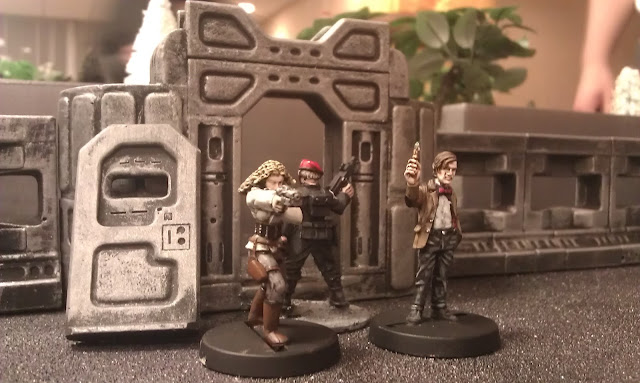 The Doctor and River breach the control room of the Byzantium’s primary flight deck.

The “blink” rules from The Doctor Who Miniatures Game were simplified to be area/squad-based rather than by individual figure. At the start of the game, one an angel got in sight line, a d6 was rolled. Any 1s meant someone in the group had blinked and the angels got the use their full move. To make things fair, we allowed the clerics to do a “snap-fire” during their own activation on any angel that had moved that turn using their non-invulnerable stats. To simulate the legions of angels, any casualties, were recycled back to their start point and allowed to re-enter the fray.

We even added “Angel Bob’s” (Cleric Bob died really early in the game) communicator taunting to the deck and when that card was called, the angel player could say something to make the doctor angry and during the distraction, get a new activation for any angel squad that had already moved that turn.

The Doctor and company started in the tunnels at the bottom of the board and then had to make their way through the “oxygen factory” forest area in the middle of the board, with the ultimate goal of reaching the primary flight deck of the crashed vessel.

Overall, we were very pleased by this one. We had a few veteran players in the mix and distributed most of them to the Angel side in order to ramp up the tension. In order to maximize the horror movie element, Noah worked in if they attacked enough of the tree-borgs, (see the episode) the “blink” numbers would eventually rise. By the end of the game, 1-3 meant someone had blinked in the increasingly dark catacombs. Everyone had such a great time, I think I’ll run this one again at Historicon.