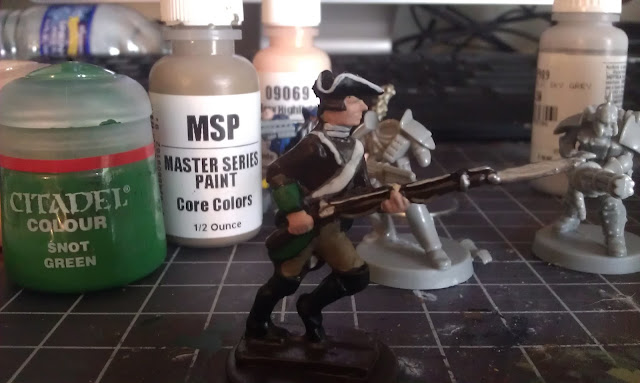 Taking advantage of one of my late work days, this morning I got the chance to paint up the first of my NQSYW (Not Quite Seven Years War) troops for my Imagi-Nation of “The Grand Duchy of Rhein-Heitsgeboten”. After a few weeks of indecision, Chris Palmer and some of the other HAWKs helped me settle on a beer/brewing themed nation with appropriate brown coats. With a few exceptions, I plan to carry the brown jacket/beige breeches theme throughout the infantry, only varying the facing colors to differentiate the regiments. The beer-bottle green for this first outing is again one of Chris’s brainstorms, so big thanks go out to him! 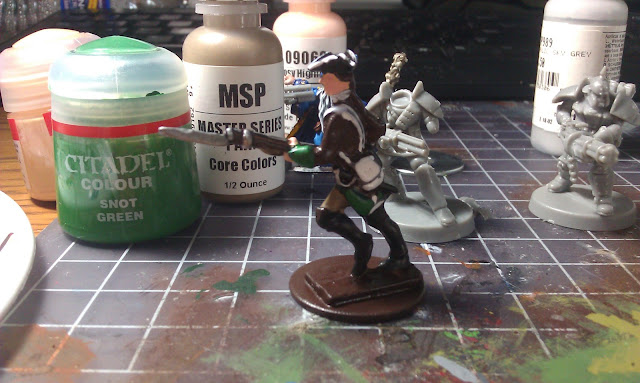 Rear/side view of the same trooper, showing turnbacks of the coat

For the paint scheme, I followed the existing regiments’ example and kept it simple with little to no shading or highlighting in order to capture a more “vintage” style. This really took a lot of self-control on my part, being a bit of a detail freak in my usual 28mm painting. The recipe was simple:

I probably won’t be able to make too much progress on the rest of the remaining company until after the HMGS Fall-In Convention season is over and done with, so stay tuned! 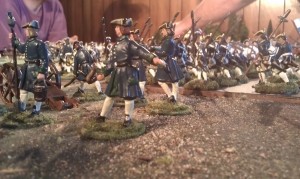 This past Saturday, I got the chance to take part in one of the Harford Area Weekly Kriegspielers (H.A.W.K.S. for short) ongoing Not Quite Seven Year War battles. Gamemastered by Rob Dean and utilizing his home-cast 40mm figures, it featured the Army of North Polenburg squaring off against the combined forces of “The Pragmatic Alliance, which were represented in this game by the armies of Schoeffen-Buschhagen and the Wachovians. Not having my own army yet, I took command of the Schoeffen-Buschhagen Wiegenburger Regiment which marched into battle well-screened behind the ranks of the Adelmann Regiment.

For a more complete account of the battle, see Chris Palmer’s post over at his Another Gaming Project Blog.

The ruleset used in this conflict were the venerable Charge!: Or, How to Play War Games by Peter Young and J.P. Lawford and since it was only the second time I had  played them, I was still a bit shaky on the mechanics, but had a great time nonetheless.

Now, to add to my already long list of hobby projects, I’m determined to paint up at least one full regiment of my own, from the newly created fictional country of “The Grand Duchy of Rhein-heitsgeboten”. The units are going to follow a beer/brewing theme, with most of the soldiers clad appropriately in medium-to-dark brown coats.